By Dan Vichorek | Reprinted from a 1981 Montana Magazine article and also an essay in the book Last Tango in Melrose Montana available from Far Country Press, Helena, Montana 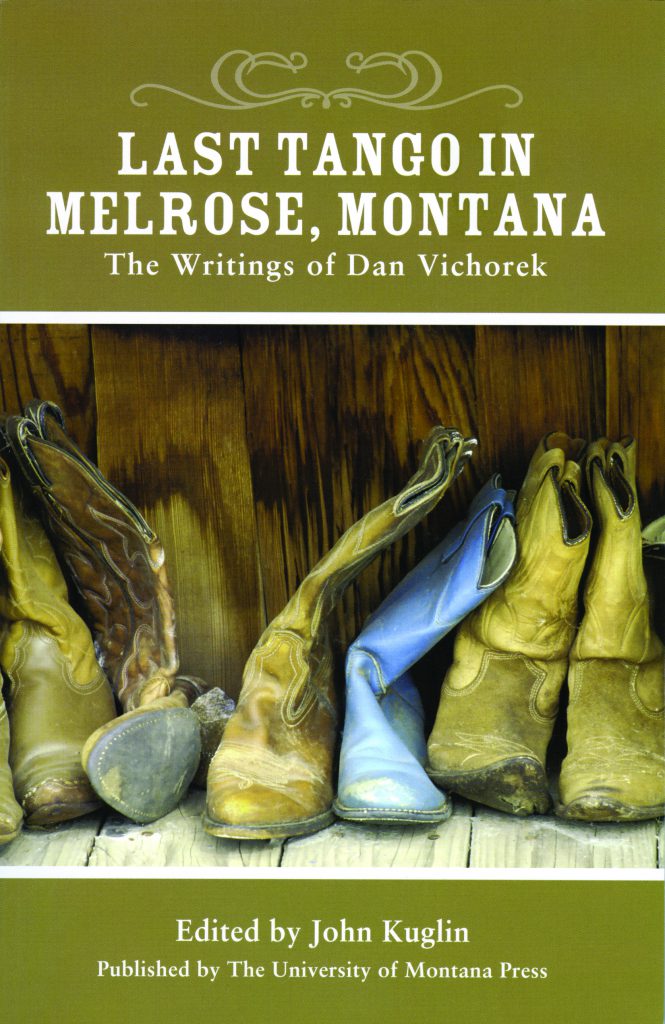 A friend of mine who pummels a guitar in a country-western band was telling me how music lovers almost killed him in Melrose one New Year’s Eve. It wasn’t a violent homicide attempt, just a near meltdown based on a misunderstanding.

“So, where the hell is Melrose?” somebody asks. It’s good they asked, because before we can tell you what happened to my friend, I have to explain to you about Melrose. Melrose is one of those towns so small that a road atlas won’t tell you how many people live there. Situated between Dillon and Butte, Montana, it used to be a hang-out for speed cops before the interstate highway passed it up like a dirty shirt. Now dogs can sleep on the main street and fanatical fly fishermen stay in its motel in season.

The fly fishermen rise to the bait of the nearby Big Hole River and walk around wearing several hundred dollars-worth of the very latest fashion in trout catcher essentials. By mid-fall the fisherfolk are gone and the town is left to its rightful citizens, the cow people—cowboys, cowgirls, cowmen, and Cowbelles—a hearty crowd. Who the leaders of this society may be these days I don’t know, but some years back the cow folk had an acknowledged king. They put up a sign at one end of Melrose that said, “Welcome to Melrose, Home of Benny Reynolds, World’s All-Around Champion Cowboy.”

My guitar-picking friend blamed his business manager for taking him to Melrose. His business manager probably took the band there because he knew what a center of musical appreciation it was. This may come as a surprise to some people, who size up the lone street and see the potential for one, maybe two, juke boxes in town. My friend and his associates had signed up to play for the New Year’s dance. They showed up, rigged up their gear and got set for their standard country-western gig. There was a good turnout. The men in the crowd got their clothes the same place Benny got his: big hats, fancy shirts, dress-up boots that would become work boots in a few seasons, string ties and clean Levis that hadn’t faded yet.

The ladies were dressed in their cowgirl finery with their hair glistening and piled on their heads like cotton candy. Outside it was 20 below with a foot of crunchy snow and rabbits were chasing their shadows around the cottonwoods in the moonlight.

Inside, the band tuned up with “The Orange Blossom Special,” and the cowboys and cowgirls danced up a storm fitten to knock the place down. The evening wore on. “Auld Lang Syne” came and went on schedule, and by 2 a.m. the band had about played itself to a frazzle and began packing the instruments to go home. Couples stood around looking puzzled by the band’s silence, and presently a large cowhand approached the bandstand and said, “You better keep playin’.” There was something about the way he said it that made us think it was a good idea, my friend said. So, the band tuned up again and played another hour, burning the players down below the numb stage. Again, they started putting their tools away, and another cowboy came up and said, “You better keep playin’.” “It was as good advice as we could ask for,” my friend said, so they tuned up again, wondering if they were ever going to see their wives and children again. In a last-ditch effort, they decided to see if they could wear out the clientele by playing extra fast. “We played as fast as we could,” my friend said. “We played the slow songs fast and the fast songs faster. ”The crowd loved it. “They damn near blew the walls out,” according to my witness.

After an hour of this, the dancers were getting well warmed up but the band was burned out beyond exhaustion. “We looked like melted wax statues sliding down a wall,” my friend said. But they couldn’t quit yet. Not while those dancers were “whirling around and jumping up and down and yahooing.”“The way those pointy-toed boots were coming down on that floor, an extra fast snake with an urgent appointment couldn’t have got across there without being trampled into mincemeat.

It didn’t look good for us. ”The band tried to keep playing. “We weren’t doing very good. Like I said, we were sort of melting down to the floor, and songs that were supposed to be played in 2/4 time were oozing out at an average no faster than 4/4. Sometimes you could hear the bass going brrrrrrrnnnnnngggggg, and the others going twang twaaang twaaaasaang, and that was about all,” said my friend. The customers soon grew tired of these ragged tunes and began submitting requests.

“They were asking for songs that nobody ever heard of, and probably ain’t been written yet,” my friend sighed. Clearly he and his band would not win much money on “Name That Tune.” They played on, the best they could. Their feeble twanging and puny appearance led some in the crowd to believe they needed some waking up, and some big cowboys sought to refresh the band by sloshing beer on them. “They’d go whirling by, a lady in their arms and a beer in their hands, and they’d reach out and spray us with a little of it. ”These beer showers worked pretty good the first few times, my friend said, and they woke up the band so fast that a tune that had slipped down to about 4/16 time would speed up to about 2/4 for a few minutes after each slosh.

They couldn’t understand what was wrong with us,” my friend said, “so they gave us the same first aid they’d give to a guy who’d been rolled on by a bull. Lacking buckets of cold water, cold beer was the best they could do. ”This went on for some time, until the band clearly was on the verge of needing an ambulance. A few couples were slow dancing, in some sort of time with the few tortured notes still escaping from the band. Presently even these die-hards gave up, and the men were saying, “Yup, it’s just about time to get home and milk that cow,” and the women gathered up the sheepskin coats and sleeping babies from the back rooms, and everybody got ready to leave. A very large cowboy said, loudly, “Let’s have a hand for the band,” and they passed a size 10½ Stetson through the crowd until it was full of money, which they put into a paper bag and gave to the band. Then they all went outside and started their frosty pickups and big clouds of exhaust vapor rolled over everybody as they scraped their windshields and wives asked husbands if they were going to get home without running into the ditch this time. Out in Michigan, the sunrise was hurrying to get to Melrose in a couple of hours. “Did that bag of money make it all worthwhile?” I asked. “Well,” my friend said, “I’ll tell you one thing. I ain’t never going back to Melrose.”