Butte hosts one of the largest FREE music festivals in the Northwest: The Montana Folk Festival. This festival, starting in 2008, has become a Montana tradition that draws thousands to the region.

Join us under the headframes in Historic Uptown Butte for a weekend of good company, great food, and endless music! 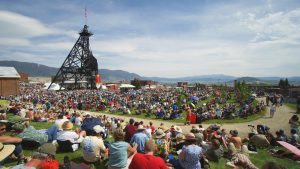 From 2008 to 2010, the National Folk Festival was presented in Butte, creating the tradition that we just couldn’t let go! The National Folk Festival is a three-day celebration featuring performances, art, and food from around the world. Every three years, the festival changes location in hopes of furthering their mission and reaching more communities. The talent and wide range of performances amid Butte’s spectacular landmarks, and natural scenery awed locals and visitors alike. The result was a wildly successful event applauded by Montanans and tourists. The festival was incredibly popular among the community that local organizers decided to take on the challenge and continue to host this remarkable annual event.

Since year one, the festival has marketed the natural and cultural wonders of Montana to new visitors each July. As in years past, the 2018 Montana Folk Festival will feature over 20 musical performances and host a variety of food and craft vendors.