Girl from the Gulches 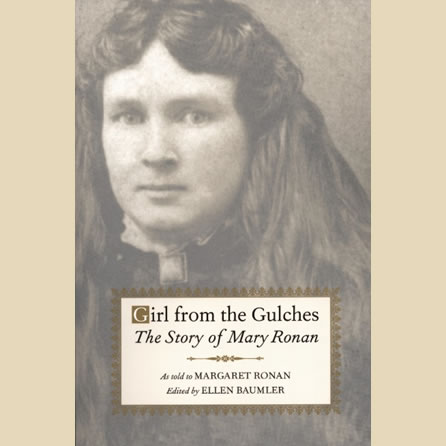 If I’m not careful, my mind will relegate Montana’s gold rush days to a dusty haze of saloon brawls and hangings, populated by a pungent assortment of what Laura Ingalls Wilder might call “rough men” using “rough language” (yes, a twenty three year old guy did just quote By the Shores of Silver Lake, and no, he feels no shame). Sure, Montana hosted its fair share of brigands and bandits, and if the old town maps with the euphemistically labeled “female boarding” establishments are anything to go by, Montana saw more than its fair share of lasciviousness. But, during those same years, Montana was a beautiful land of opportunity and, it would seem, not a half bad place to grow up.

I just finished reading Girl from the Gulches, a book that is not only historically accurate, but will bolster your faith in human decency, a rare combination. Born in 1852, Mary Sheehan and her family followed the gold rushes to Colorado and then Montana before moving to Southern California. Mary married Peter Ronan and moved with him back to Montana. Peter eventually took a job as the agent for the Flathead Indian Reservation. In a typically corrupt and disreputable business, Peter Ronan served the Reservation for over a decade with honesty and justice. In 1929, Mary Ronan recounted her story, from 1852 to 1898, to her daughter Margaret. In 2003 Ellen Baumler, the Montana Historical Society’s interpretive historian, edited this manuscript and published it under the title Girl from the Gulches: The Story of Mary Ronan.

Mary’s story reads like a who’s-who of Montana history. As a school girl in Alder Gulch, she took lessons from Thomas Dimsdale, editor of Montana’s first newspaper, and apparently hosted George Ives and other members of Henry Plummer’s gang. In Helena, her social circle included the Maginnises, Rumleys, Galens, Fisks, Holters, Mings and more, all famous names, in Montana history at least. After she married and lived on the Flathead Reservation, she hosted other notables, including Fathers Ravalli and Palladino, and Chiefs Arlee, Michell, and Charlo. Mary knew many of Montana’s greats and treated them as friends.

I found the book interesting too because Mary viewed the unpolished west with love and joy. She writes of playing all over the hills around Virginia City, oblivious to vice and danger, though her mother always sent her on errands with the command “now run Mollie, and don’t be afraid.” She said she knew that the “fancy ladies” who populated much of Virginia City “were not ‘good women,'” though she “did not analyze why.” In the rough mining town of Helena, she wrote of sleighing parties with oyster soup, long walks to Broadwater hot springs, Latin lessons, and theaters, oblivious and unconcerned with the “viciousness that […] was flaunted on the streets of every mining camp.” Mary can at times appear naïve and paternalistic, especially when discussing Mexicans in California and Indians in the Flathead, but her stories always abound with compassion. In her own way, she has a keen eye for the plight of the disenfranchised.

This post was supposed to go into my “Follow So-and-So through SouthWest Montana” series, but the academic in me couldn’t resist writing a review. Besides, fascinating as the book is, location-wise it touches mainly on the big three-Bannack, Alder Gulch, and Helena-which have already featured plenty of times in the “Follow So-and-So” series (it also spans a time period fairly well covered by the series, please if anyone knows of books about SW Montana before the gold rush or after WWI, help a blogger out, and comment on our Facebook page). But it is a fantastic little book to read as you travel through SouthWest Montana, and the section about her time in the Flathead is the perfect segue as you travel from SouthWest Montana to Glacier National Park.

Oh, and if you haven’t yet, you need to check out Ellen Baumler’s blog: www.ellenbaumler.blogspot.com for more Montana history.