The Pilot and the Cathedral 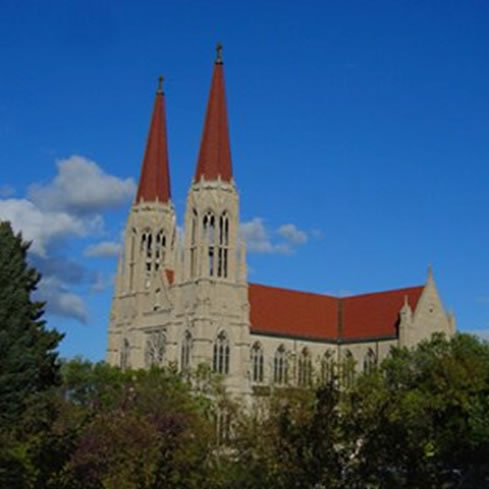 Here’s a tale that has all the trappings of a good Montana yarn. Legend has it that some time in 1945, a military fighter plane roared through Helena and flew sideways between the twin spires of the Helena Cathedral before disappearing over the mountains to the north.

I first heard the story as a kid, riding the Last Chance Tour Train, listening to the guides weave stories of Helena’s history. Although the tours are great sources of information, for many years the tale of the pilot and the Cathedral fell into the “it could be true” category. The verifiable facts are these: the interior walls of the towers are 60 feet apart, and the towers reach 230 feet into the air. Beyond that, well people claim to have seen an airplane, but who knows for sure?

According to the Montana Catholic, the diocese of Helena’s monthly newspaper, in 2011 disputes over the legend were put to rest. Retired Air Force Col. Raynor Roberts claimed that he was the pilot who flew through the spires. In 1945 Roberts, who went to high school in Helena and flew in Europe during World War II, was flying a P-51 fighter from Luke Air Force Base in Arizona to Great Falls. As he flew over Helena, he prankishly buzzed the houses of his mother and girlfriend, and then the young daredevil tilted his plane sideways and squeezed between the Cathedral’s spires.

It’s the perfect Montana story: scant on evidence and long on legend. Whenever I look at the towers of Helena’s Cathedral, I can’t help but imagine a P-51 squeezing between the crosses.