In the wild west, murders and robberies of the innocent are considered especially heinous. In Virginia City, the dedicated citizens who investigate these vicious crimes are members of an elite squad known as the Vigilance Committee. These are their stories:

On this date, six men set up camp along a stream surrounded by Alder trees, panning $2.40 in the first pan. This encouraging find promised immense potential. Word spread quickly and soon Alder Gulch was flooded with hopeful miners; with an influx of people came an increase of violence. 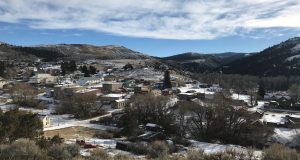 Henry Plummer, a prospector and resident of Bannack, takes favor with the people after killing a man who had bullied and exploited his fellow prospectors time and again. In 1863, Plummer was elected Sheriff, but he was mixed up with the outlaws and quickly realized that the lifestyle he could maintain through robbery and the incitement of fear better suited him. His gang of “Innocents” or “Road Agents” as they were known began causing trouble in the region. Their violence and crimes began to step out of line, and the settlers were fed up. It is here that our story begins, with a man by the name of George Ives.

George Ives was the final straw, the catalyst, that threw the 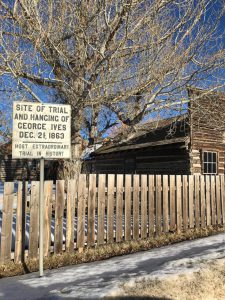 Vigilance Committee into being. Ives was anything but a peaceful man, openly participating as a “road agent” and patrolling the main road on horseback, threatening all who so much as looked in his direction. The body of Nicholas Tbalt was found discarded in a field after he had been brutally murdered and robbed. Not long after, Ives was seen with the stolen mules saying “Tbalt would never trouble anyone again.” Twenty-five men, enraged by Ives’ actions, pledged their support of one another and set off to capture and publicly hang George Ives on December 21, 1863. Sheriff Plummer, the leader of the Road Agents, refused to come to Ives’ aid as he was worried of what these men might do to him.  Montana was not yet a state and there were no official laws, but these 25 men created the Vigilante Movement, taking the law into their own hands and setting the stage for January 14, 1864, a day (for Montana’s purposes) that will live in infamy.

The Committee took it upon themselves to identify and try the other members of the Road Agents. They set out to find nine men in early January: one was not found, one escaped, seven were tried and five were found guilty and executed: Hayes Lyons, Boone Helm, Frank Parish, George Lane, and Jack Gallagher. 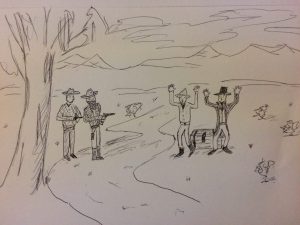 Brief Account: Several months before the hanging, he was tried and convicted of another crime (likely murder). Rather than hanging him, he was banished. After falling in love with a local named Caroline, he returned to Virginia City. Hayes (along with the two men that were caught and released on the same evening) was accused of killing Deputy John Dillingham, who may have been the only honest lawman at the time. During the trial, Hayes claimed that he acted alone and to send the others away. Lyons was also one of the five men that had tried to burn down Virginia City only a few weeks earlier.

Death: With a noose around his neck, he spent his final minutes crying out for Caroline. A friend and observer told him that he would go find her. His final words were “Give Caroline back her gold watch, and tell her to take care of my body and not to leave me hanging long.” Caroline never made an appearance.

Brief Account: Known far and wide as the Kentucky Cannibal, Helm was a gutsy outlaw who refused to take no for an answer. He moved to the west from Missouri hoping to strike it rich in the gold mines of California. After killing his cousin, whom he had convinced to move with him, he was thrown in an insane asylum from which he escaped after convincing a guard to take him for a walk through the woods. Helm bounced around from Salt Lake City to San Francisco, Oregon to Texas all while killing innocent people and stirring up trouble. He was caught in Texas, but again let free after his brother paid off a guard. Eventually he made his way up to Montana where he fell in with Henry Plummer.

Death: His final request was “I want one more drink of whiskey.” As Gallagher continued to freak out beside him he admired his coat and yelled over “Give me that coat Jack! You’ve never given me anything.” One witness claimed that his final words were “Kick away old fellow, my turn next. I’ll be in Hell with you in a minute! Let ‘er rip!” and jumped off the hangman’s box before it could be kicked away by the executioner.

Brief Account: Parish was described as being rather quiet, steady, and very poor. Rather than being a prospector like so many others in the area, Parish established a ranch on Rattlesnake Creek. People were suspicious that he had discovered gold on the property, but this was not the case. In the winter of ’63, his hands and feet froze leaving him crippled. With the ranch settled along the main stage route, his wife would prepare and sell meals to travelers. That winter, he also became deathly ill and the doctor expected him to be dead within a day, but he made a miraculous recovery. On January 14, he was feeling well enough to go to town for some supplies. It was then that he was surrounded and accused of being a Road Agent. He is said to having confessed to “rustling cattle and horses, providing food for the outlaw band, and robbing a stage,” for this he was sentenced to death. It should be noted that he may have fed the outlaws traveling on the road, but he was probably also feeding any traveler in need. Also, when the stage was robbed, Parish was bedridden, but no one said anything.

Death: Frank’s final statement gave instructions for the payment of his debts and the names of those he wished to inherit his clothing. Having seen three men beside him be hanged, he asked that the black handkerchief be taken from his pocket to cover his face. The executioners complied with the request before pulling away the box.

Brief Account: Originally from Massachusetts, Lane moved west for gold, running into some trouble along the way at which point he was accused of running off horses. This is difficult to believe as he was born with a muscle paralysis which prevented one heel from touching the ground, making it difficult to walk (let alone run) very well. He made it to Virginia City and worked as a skilled craftsman and was described as being an honest man. At the time of Ives’ accusation, Lane is said to have ridden to Bannack to ask Plummer to testify on Ives’ behalf. He refused as he was unsure of what the Vigilantes would do to him (probably try and hang him as well).

Crimes: Road Agent, co-conspirator providing information on the transportation of valuables to Plummer and his gang, and telegraph agent for the “Innocents”

Death: When arrested, he stated: “If you hang me, you will hang an innocent man.” He then asked for a minister who prayed with him until his death. His final words were “Believe in my innocence, I am not able to witness these deaths,” before jumping off the box himself.

Brief Account: After being sent to the Yellowstone Area to explore the possibility of additional gold mines, and coming back empty handed, Gallagher was appointed Deputy Sheriff of the Virginia City District by Henry Plummer. Gallagher provided the gang with the vital information as to when successful miners would be travelling with their gold at which time they would be ambushed, robbed, and murdered. This was all done under the protection of Plummer.

Crimes: Road Agent, co-conspirator, accessory to robbery and murder, covering up the murder of John Dillingham, and attempted murder of George Temple

Death: Before being hanged, Gallagher lost his mind. He was crying and screaming, and then pulled out a concealed knife and threatened to slit his own throat before he could be hung. The executioner pointed a pistol at him saying that if he tried anything he would simply be shot in front of everyone. Gallagher then saw a friend and yelled “I’m going to heaven. I’ll be there in time to open the gate for you.” He then struck a pose saying, “How do I look, boys, with a halter round my neck?”

Following the chaos of the simultaneous hangings, the bodies were laid in the street, yet no one (not even Caroline) came to collect the men. Having waited for two hours, the executioners took the bodies to a barren and windswept hill that overlooked town, dug shallow graves and disposed of the bodies covering the graves with boards. The graves, which travelers can visit today, are marked by replica wooden headstones, that were first placed in 1907.