What would you do for a loaf of bread? The Alder Gulch Four Riots

Remember in November, when winter weather was fun and exciting? It’s getting less so now. The thought of a cold and snowy spring brings to mind (at least to my mind) a colder and snowier spring. The winter of 1864-65 started out calmly enough. A September issue of the Virginia City based Montana Post noted that winter made the route from Salt Lake to Montana difficult, and suggested that home owners be sure to stockpile provisions. When snow closed the passes completely in December of 1864, no one was very alarmed. In fact, the price of flour-the most important food in Alder Gulch at the time-dropped slightly in February 1865 to between $22 and $26 for a 98 lb. bag of flour. A month later and 40 foot drifts still clogged the passes. Flour sold for $30/sack, then $40, then $47. On April 2, a gang of starving prospectors decided they didn’t much care for the free market, and forced merchants to sell at $25 a sack. Inspired, community members tried to seize flour stores from a merchant. A stand-off between sheriff’s deputies and community members narrowly avoided developing into a full-fledged fire-fight. Within 2 weeks, prices had entered the absurd. Flour supplies had dwindled to almost nothing and merchants charged as much as $100 for a sack of flour. On April 22, a group of over 400 citizens, led by a man waving an empty flour sack on a stick, marched into town. 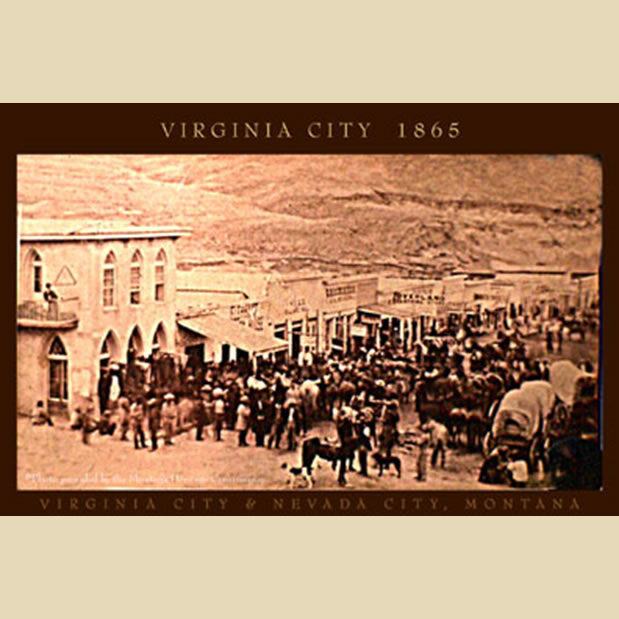 Without a single altercation, this group searched all of Virginia City and confiscated every sack of flour they found. They made a thorough search, finding sacks beneath floor boards and hidden in haystacks. I can’t think of a better word, but I hesitate to call the thing a ‘riot.’ No buildings burned, no fights broke out. A few opportunists tried to loot a store, but they weren’t affiliated with the ‘rioters.’ For each of the 82 sacks confiscated, the group issued a $30 promissory note. Then they took the flour to Leviathan Hall and sold it. If a man could prove he had no flour, he could buy 18 pounds. If he had a family, he could buy more. As the supply dwindled (which must have happened quickly) the ration dropped to 10 pounds. A month later, the first flour trains made it over the passes, and Alder Gulch returned to normal.

Perhaps you’ve been wondering how far 82 sacks of flour would go? Before I finished this post praising the restraint of the ‘rioters,’ I decided to crunch some numbers. Eighty two sacks, at 98 lb. a sack, amounts to 8,036 lb. of flour. Had the ration started at 10 lb. a person, the committee could have distributed enough flour for about 803 single men. But the ration started much higher, 18 lb. a person, which means that out of a starving population of over 10,000, the committee managed to feed less than 800 people. Look at it another way: a loaf of bread uses about 1 lb. (3.5 cups) of flour, meaning that the committee confiscated enough flour for 8,036 loaves of bread. Assuming that the bread was distributed evenly (and you can bet it wasn’t) and assuming 10,000 people lived in Alder gulch (some estimates put it upwards of 11,000) each person would have gotten eight tenths of a loaf of bread.

The winter before the bread riots, public outcry resulted in the formation of an extralegal committee that was responsible for nearly 20 hangings, so I’m impressed with the level of restraint shown by the citizens of Alder Gulch in the 1864-65 winter. I also think that the merchants (who were making a 20% profit when flour was $22.00) may have gotten a little greedy. However, this time around, I’m left to wonder, “What was the point?” What do you think, were the ad hoc rationers heroic? Or were their actions, like the flour sack banner of their leader, empty?

Johnson, Dorothy M. “Flour Famine in Alder Gulch, 1864.” Montana: The Magazine of Western History. 7, 1 (1957).
Underhill, W.M. “Historic Bread Riot in Virginia City.” The Washington Historical Quarterly. 21, 3 (Jul 1930).
Pictures from: www.virginiacity.com. The first photo is a picture of Virginia City a few months before the bread riots, and the second is The Star Bakery, in Nevada City, which has been open since 1863.