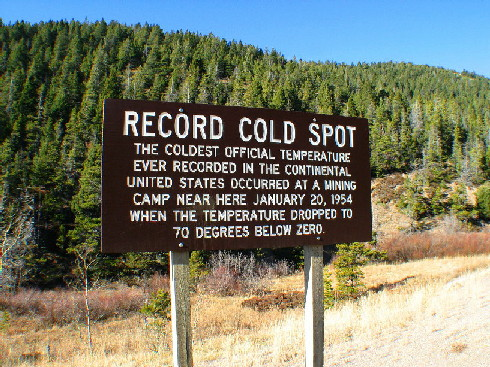 Snow had been falling almost continuously for a week and It was very cold; the tempera-ture had only risen to minus 18 degrees. Finally, late in the day, the snow and wind stopped, skies cleared rapidly, and as the sun set the temperature plummeted. Early the next morning on Jan. 20, 1954, Montana’s and the continental 48 states’ record cold temperature of minus 70 degrees was observed at a mining camp near the Continental Divide a short distance from Rogers Pass near Helena. The reading was observed by one of the National Weather Service’s cooperative observers.

The Rogers Pass weather station, located at an elevator 5,470 feet, was established May I, 1953, at the 4 K’s Mine located at Highway 200 and three-fourths of a mile west of where the highway crosses Rogers Pass.

Richard A. Dightman, State Climatologist at the Weather Bureau, was not aware of the record it until about February 3 when January’s records were received at the Helena office. The January 20 minimum temperature was entered as minus 68 degrees. Dightman noticed that this would be a record, valid, breaking the old national record of minus 66 degrees at West Yellowstone, Montana, on Feb. 9, 1933. So H. M. Kleinschmidt, the observer, was contacted and asked to send in his thermometer to be checked and to provide any other information he could to help evaluate the reading.

He not only sent in the official minimum thermometer, but also included his own alcohol thermometer. He wrote that he was awake most of the severely cold night because of loud and frequent “popping” noises in the cabin. About 2 a.m. he got up and looked at his thermometer located outside an insulated window. It read about minus 68 degrees. He then went outside to the official shelter and found the minimum thermometer indicating a temperature colder than minus 65 which is as low as the scale on it indicates. The minimum index from which the temperature is read had retreated into the bulb and was tilted since the index end had fallen into the bulb.

The two thermometers were sent to the Weather Bureau’s Instrument Division in Washington, D.C. where they were checked in the laboratory exactly as the observer described. The index in the official thermometer fell into the bulb and remained at the described angle at a temperature of minus 69.7 degrees and at this temperature, Kleinschmidt’s personal thermometer indicated minus 68 degrees.

Conditions had been right for an extreme temperature. The station was located at a high elevation in a saucer shaped depression. During the previous week there were several fresh invasions of very cold arctic air into Montana. Seven days of almost continuous snow increased the snow depth from eight inches to 66 inches at the mine. The night was crystal clear with no wind-ideal conditions for strong cooling.

Perhaps it should be pointed out that the record is an extreme occurring in an extreme location under extreme conditions-in a small, high mountain valley with about six feet of snow on the ground, 58 inches of which had fallen recently. The minus 70 degree reading was not representative of the more densely populated areas of the state; that night a low of minus 31 degrees occurred in Butte, minus 43 degrees in Havre, minus 34 degrees in Billings, minus 37 degrees in Great Falls, minus 36 degrees in Helena and minus 14 degrees in Missoula.

The facts that the two thermometers behaved in the laboratory exactly as described by the observer, that temperatures of minus 57 degrees and minus 59 degrees were recorded in the same general area and that the observer was not aware that he was recording a record temperature were sufficient evidence to adopt the minus 70 degree record.

Most stations are supplied with thermometers similar to Kleinschmidt’s that only go to minus 65 degrees. Thus, these thermometers cannot break the record. We know only that on that night it was at least minus 70 degrees; it very well may have gotten colder but the thermometer was unable to record it. The minus 70 degree reading was at 2 a.m. and normally the night’s minimum temperature occurs shortly after sunrise. Early that morning, it is quite possible that the temperature at that Montana location could have surpassed the record for all of North America 81.4 below zero observed at Snag, Yukon on the border with Alaska. Prospect Creek and Fort Yukon in Alaska have registered 80 below zero.

The record more than likely will have to be broken in a high mountain valley somewhere in Montana or perhaps Wyoming. In the past couple of years some places in Montana have exceeded 60 below zero and a bit colder but no readings have approached the 70 below mark. Where we live in Big Sky temperature readings of 35 – 45 below occur, but we haven’t even touched 50 below in several years.

A few selected weather stations in areas such as this are supplied with colder reading thermometers. And not only must the extreme conditions exist to establish a new record, but someone has to be there to observe!