By Rick and Susie Graetz | Office of Research and Creative Scholarship | University of Montana
The Corps of Discovery spent more time in what would become Montana than any other place on their entire 8,000 mile plus journey. And after they reached the three forks of the Missouri on July 27, 1805, they spent about three weeks in what would become Southwest Montana.

On the return journey, Clark spent an additional eight days in the area. When Lewis and some of his men crossed through the now Lemhi Pass on August 12, 1805, they became the first know white men to cross the Continental Divide in the future western USA. 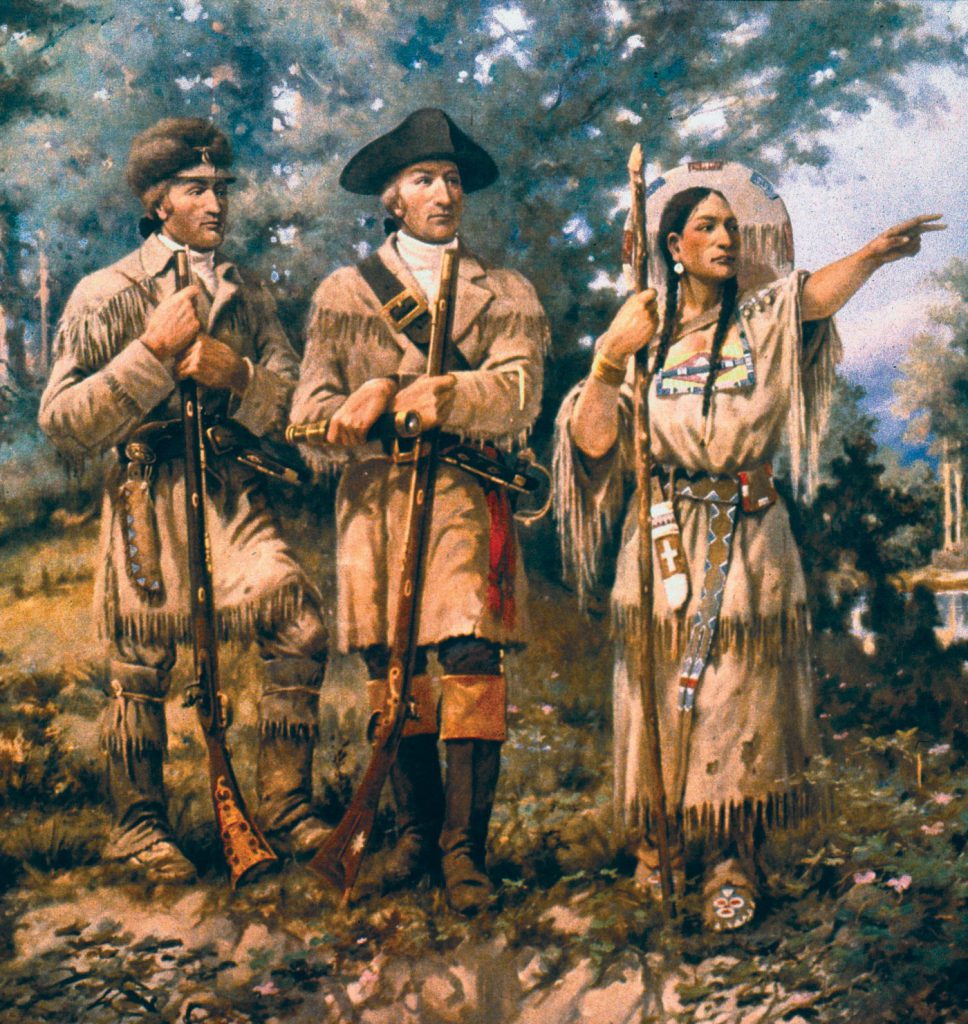 Background:  Appointed by President Thomas Jefferson, Meriwether Lewis and William Clark, with their Corps of Discovery, left Camp Dubois near St. Louis, Missouri on May 14, 1804, to embark on one of history’s most storied expeditions the exploration of the northern sector of the recently acquired Louisiana Purchase. Specifically, Jefferson’s instructions were:

“…the object of your mission is to explore the Missouri River & such principle stream of it, as, by its course and communication with the waters of the Pacific Ocean may offer the most direct & practical water communication across this continent for the purposes of commerce.”

This journey was one of the most significant events in our nation’s history. To quote Roy Appleman in his publication written for the National Park Service: “they carried the destiny as well as the flag of our young Nation westward, from the Mississippi across thousands of miles of mostly unknown land … up the Missouri, over the Rocky Mountains and on to the Pacific. This epic feat not only sparked national pride, but it also fired the imagination of the American people and made them feel for the first time the full sweep of the continent on which they lived.”

Prior to their trip, the West was virgin territory passed through by only a few white explorers; a mysterious place that stirred the imagination. After these two leaders made their journals known, all manners of others followed their pathway, most via the Missouri River.

Lewis and Clark were not only brilliant explorers, but also humanitarians. Appleman noted that hostilities with the Native Americans were limited and “… were undoubtedly far less severe than they might have been were it not for the reservoir of goodwill the expedition had left with nearly all the western tribes … blending fairness, honesty and strength with patience, respect and understanding, Lewis and Clark recognized the personal dignity of the Indians, honored their religion and culture … and tried to establish inter-tribal peace. Masters of primitive psychology, they instinctively and unerringly always seemed to make the right decision and rarely offended the natives.” Unfortunately, many of those who came later, including the US Government, didn’t exhibit this same attitude.

It took nearly a year for the party to reach the confluence of the Missouri and Yellowstone rivers, located in present day North Dakota. On April 27, 1805, after having spent a couple of days at the meeting of these great powerhouses, the Corps entered what eventually would become Montana Territory.

Setting foot in country they described as more beautiful than could ever have been imagined, they were particularly impressed with the abundance of wildlife.

The two captains spent four months following the Missouri through eastern and central Montana, past the future sites of Great Falls and Helena to what is now Three Forks, then routing up the Jefferson River to the Beaverhead and its confluence with Red Rock Creek—today the site of Clark Canyon Reservoir. From there, they traversed west through Horse Creek Prairie to Lemhi Pass, arriving on the Continental Divide and the Montana/Idaho border on Aug. 12, 1805. One of the farthest headwater trickles of the Missouri had been reached.

Their path then proceeded down the west side of the Divide to Idaho’s Lemhi River Valley, trailed north to the Salmon River, then back into Montana again somewhere in the area of what would become Lost Trail Pass. Moving up the Bitterroot Valley to a place they called “Travellers rest” near present day Lolo, the Corps turned west again, crossing Lolo Pass into Idaho. They eventually found their way to the Pacific Ocean.

On June 29, 1806, on their return journey from the west coast, the Expedition once more ventured over Lolo Pass to Travelers Rest. From there the leaders split. Lewis headed through present-day Missoula up the Blackfoot River and across today’s Lewis and Clark’s Pass, east of Lincoln. Attaining the Continental Divide at this point, Lewis and his men trekked to the Sun River and eventually were reunited with the Missouri.

Clark, upon leaving Traveler’s Rest, retraced part of their previous route up the Bitterroot River, then entered the Big Hole Valley on his way to a cache they had left near Horse Creek. After navigating the Beaverhead and Jefferson rivers to Three Forks, he turned east through the Gallatin Valley and on to the Yellowstone River, following it to the Missouri. Clark and his men soon rejoined Lewis, and the Expedition continued to St. Louis, reaching the terminus of the adventure on Sept. 23, 1806.

The Montana landscape Lewis and Clark viewed almost 200 years ago, especially along stretches of the Missouri River from the North Dakota line to Fort Benton, has changed little.

After Thoughts “Of courage undaunted”

Counting their odyssey to the Pacific Coast and the return passage to St. Louis, the explorers spent nearly six months in Montana. Their time here was significant, and provided Lewis and Clark with some of their most memorable experiences, as well as periods of extreme hardship.

Previous to their visit, the land that would become Montana was unknown. In describing the topography and mapping the Missouri River, the captains laid to rest the belief that the big river might offer a navigable water passage to the Pacific. Clark, on his return journey charted a significant portion of the Yellowstone River and Lewis realized from exploring the Marias on his way east that the boundary of the Louisiana Purchase didn’t extend beyond the 49th parallel. This ended the hope that America owned a larger portion of the lucrative fur trade territory.

The late historian K. Ross Toole tells us “Lewis and Clark left in their journals not only a story of hardship and courage … but the story of wealth … Although they left only the ashes of their campfires behind, Montana would never be the same again.” They opened the way for others who came to exploit the land and set a pattern. The colonial economy that began in Montana shortly after the Corps’ passage would run strong for more than 100 years and, to a certain extent, still exists.

One could say the Native Americans suffered most as a result of the Expedition. With few exceptions, the Indians Lewis and Clark encountered extended the hand of friendship as well as food, horses and information. Too often though, the white men who followed betrayed this hospitable welcome. Within 80 years of the journey, most tribes were restricted to reservations.

Upon their return to St. Louis on Sept. 23, 1806, the Corps of Discovery was given a well-deserved hero’s welcome. It would be difficult to identify another adventure on American soil as great as this one. Reading what these 30 men, one woman, an infant and a Newfoundland dog experienced is nearly unbelievable—the incredible physical toil, often hindered by Mother nature’s whims, as well as her creatures, both large and small, seemed to be more than mere humans could handle.

What about afterward? Captain Clark married Julia Hancock, for whom he named Montana’s Judith River. He was appointed superintendent of Indian Affairs for the Louisiana Territory, and garnered the rank of Brigadier General of the Militia. He was praised highly for his fairness with the great Indian Nations of the Upper Missouri. He also took on the role of educating Sacajawea’s son Jean Baptiste Charbonneau. Clark died Sept. 1, 1838, 31 years after the expedition was completed.

President Jefferson appointed Meriwether Lewis governor of the Louisiana Territory and hoped Lewis would proceed quickly with publishing the journals of the Expedition. Lewis’s success as governor was checkered. He drank heavily, paid little attention to his duties, went deep into debt and was unsuccessful in courting, although he did manage to have moments of achievement. Lewis suffered bouts of depression and other mental issues. In October 1809, he set out for Washington to defend bills he had submitted to the government, and it is assumed, to have his Journals readied for printing. Sometime during the night of Oct. 11, 1809 or the early morning hours of the 12th, at an inn on the Natchez Trace in Tennessee, he committed suicide.

Thomas Jefferson never wavered in his support of his protégé. In 1813, Jefferson defended his reasons for choosing Lewis:

“Of courage undaunted, possessing a firmness & perseverance of purpose which nothing but impossibilities could divert from its direction … with all these qualifications as if selected and implanted by nature in one body, for this express purpose, I could have no hesitation in confiding the enterprise (the exploration of the Louisiana Purchase) to him.”

And the late Stephen Ambrose described him as “… a great company commander, the greatest of all American Explorers, and in the top rank of world explorers.”

In 1814, Nicholas Biddle arranged with Clark to publish an account of the Expedition based on a paraphrased version of the journals, but left out much of the scientific information. As a result, Lewis & Clark initially didn’t get credit for all their discoveries. Ninety years later, Reuben Thwait did an eight-volume set of the journals. It was with this edition that the explorer’s stature began to be elevated.

In the 1980s, Eric Moulten, through the University of Nebraska, published the definitive work filled with outstanding footnotes—some 13 volumes including an Atlas of Clark’s maps make up this exceptional effort.