As you stroll along the Helena Walking Mall in the Capital City, chances are high you’ll find yourself staring at the Montana Women’s Mural. For those unfamiliar with Helena’s Downtown, you will find the mural on the side of the Livestock Building along Broadway Street, across from The Basecamp. This behemoth of a mural (3,000 square feet) was painted in 1979, but how did such an incredible piece come to be? and who is represented in the artwork?

Making of the Mural

In 1975, the Helena Women’s Center was founded to address and act upon issues concerning women. In addition to their work advocating for women’s rights, the group came up with the idea of the Montana Women’s Mural as a way to “forge links between older and newer Helena residents, between artists and patrons of the arts, and among diverse age, income, and ethnic groups” notes an article from Distinctly Montana.

The mural was planned and painted by Anne Appleby, Marilyn Sternberg, and Delores Dinsmore. Designer Anne Appleby led the project and brought in a number of teenage girls for the project, teaching them all aspects of research, planning, and mural design. The mural was funded by the Montana Arts Council, the Helena Indian Alliance and President Carter’s CETA program among other sources. While the mural was not supposed to be permanent, it has become a longstanding landmark in Helena and was restored in 2005 by Joe Thielen.

As you take in the beauty of this dedication to all women, you may notice there are truly three distinct sections. 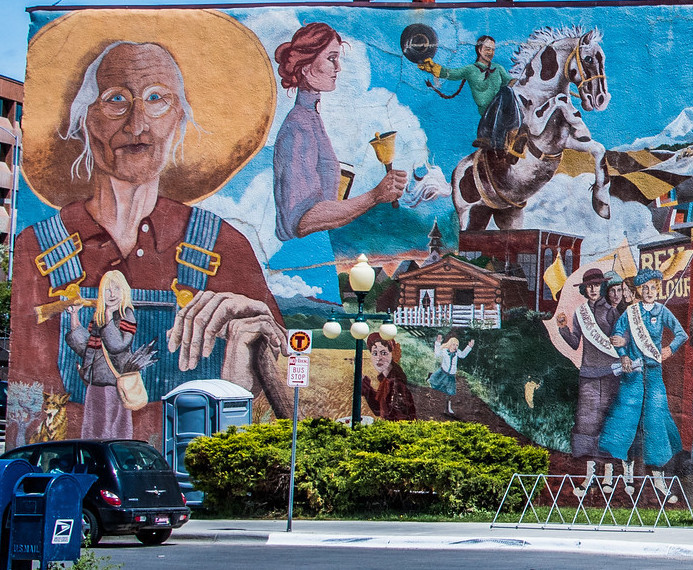 The first section is defined by an older woman, historian Ellen Baumler notes that she “represents the true pioneer, reflecting on her life through memories of herself as a little girl, running free in the Prickly Pear Valley, hunting rabbits with a faithful dog at her side.” This section nods to changing times in Montana. Near the older woman you will find a school teacher and an artist who commemorate the women who came out west to bring education and stability to the wild frontier.

As you continue through the painting, you’ll find one of the only distinct characters in the mural – that being the depiction of Fannie Sperry Steele, World Bucking Bronco Champion. Fannie’s story is one of grit and independence. Fannie alongside a number of suffragists represent the women who took on nontraditional roles and blazed the trail for generations to come. Here lies the transition into the second panel. 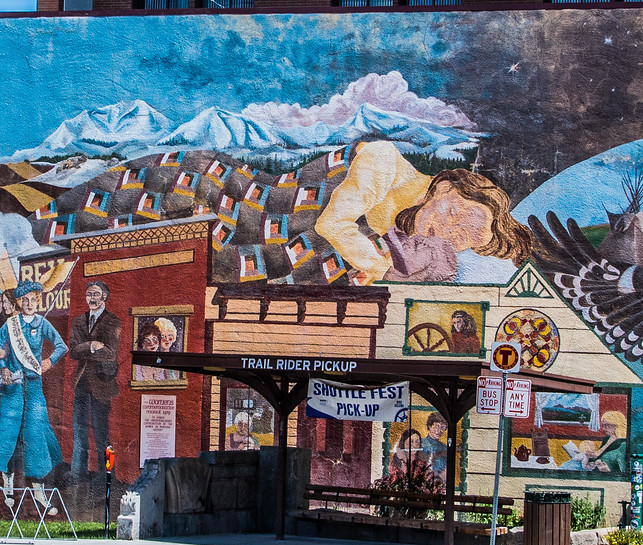 The second panel focuses on storefronts, a house and a mother and child wrapped in a quilt. This section celebrates the diverse roles of women in the Helena community beginning with the suffragists. As the mural notes those women who had a role in the making of Helena, the ladies of the evening cannot be forgotten – a fixture in nearly every 19th and 20th Century mining town.

In the house you will find a modern housewife, and musicians (specifically the depiction of guitarist MJ Williams) furthering the diverse roles of women. When the mural was being planned in the 1970s, local businesswoman Debi Corcran and her newborn son Eli served as the model for the murals centerpiece. Baumler notes the quilt wrapped around mother and child symbolizes “motherhood, childhood memories, women’s social gatherings, family history, heirlooms, and the importance of handing these things down.” 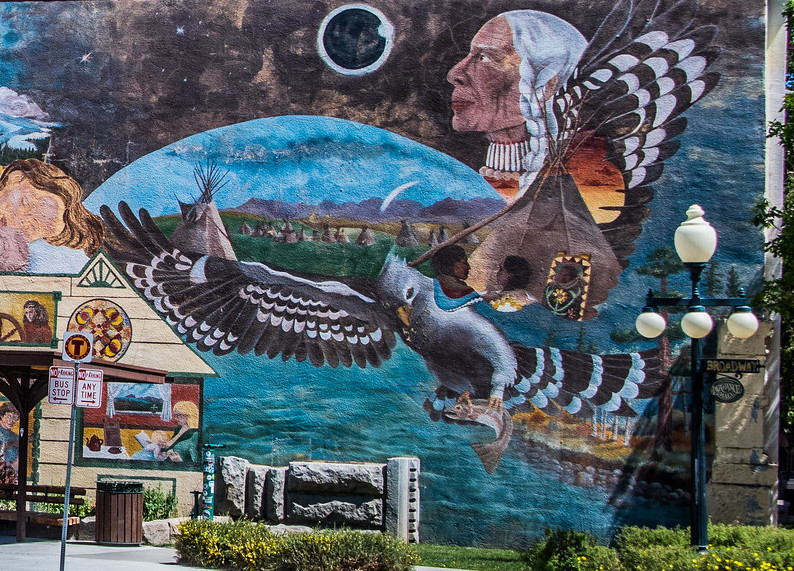 The final panel feels much different than the first two, largely because of the dark sky. In 1979, there was a dramatic eclipse of the sun. While the eclipse was not in the original plans, artist Anne Applebee chose to include the phenomenon because of the incredible impact it had on the community. The eclipse is prominently depicted, but as with all things the eclipse meant more than the simple disappearance of the sun to the people of Helena.

The two women, the old woman in the first panel and the Native American woman in the third, bookend the mural bringing viewers full circle as they reminisce on their own past and that of Montana.