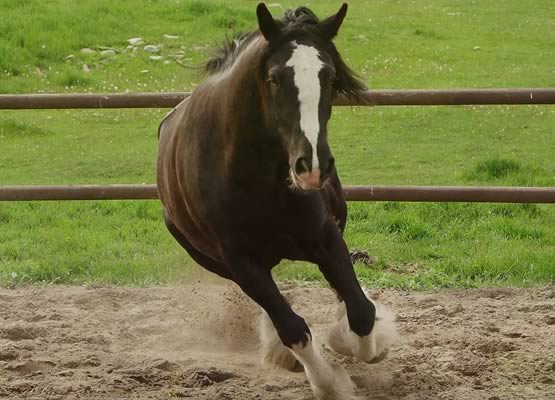 With continued word of gold strikes in the area, thousands flocked to Montana in hopes of striking it rich. This influx of people was extremely evident along Grasshopper Creek (home of Bannack) and Alder Gulch (home of Virginia City). With an influx of residents came an increase in crime, which saw little regulation before Montana became a territory in 1864. The residents of the area became fed up with the violence and took the law into their own hands, creating the Vigilance Committee. Some of the most famous hangings by the Vigilance Committee included George Ives (the first), and the simultaneous hanging of five Road Agents – Hayes Lyons, Boone Helm, Frank Parish, George Lane, Jack Gallagher, and Jack Slade (the last).

Virginia Slade was a highly devoted wife and would stand by her husband Jack regardless of the accusations. She was stunning – a tall, full-figured, raven-haired woman. She wore a revolver under her skirt and could shoot with the best. The Slades would often race their thoroughbreds through the streets of Virginia City as Virginia was an avid horsewoman.

Joseph A. "Jack" Slade, and his wife, Virginia, came to Virginia City in 1863 after Jack had been fired from Ben Halloday's Overland Stage Company. Jack was a known troublemaker, but some labeled him as a "Jekyll and Hyde" character; although he would go on unwarranted rampages, he was also responsible for several noble acts. For instance, he once rescued a woman whose husband had been killed before tracking down the murderers and killing them. For the most part, Slade was liked by the community ... until he would start drinking and all hell broke loose.

After a night of particularly destructive rebel rousing the Vigilance Committee decided they had had enough of Jack Slade. They held a brief trial and ruled in favor of the hanging of Slade. Knowing that Virginia could be quite persuasive, the vigilantes knew they needed to act quickly. A friend had left to warn Virginia of the impending hanging, but it was too late. Just as someone in the crowd shouted, "Mrs. Slade is coming!" the box under Jack's feet was kicked away. Silence filled the air, followed by thundering hoofbeats and a cloud of dust as Virginia arrived to defend her husband.

Following this incident Virginia remarried, but was quickly divorced when Jim Kiskadden realized that only the devil could live with her.

Today, residents claim to have caught a glimpse of Virginia's ghost riding furiously toward town, her black skirt billowing, a cloud of dust appearing, and inevitably the screams fill the valley as she fails to reach her husband in time.