On a day when the unrest in our country is tangible we are taking a break from the 2020 politics by looking back at one of the most contentious elections in our state’s history. The election of 1894 would determine the permanent home of Montana’s state capital. In 1892, a presidential election year (Cleveland vs. Harrison) a vote was held between seven Montana cities vying for the capital seat. The race featured Great Falls, Helena, Butte, Boulder, Anaconda, Deer Lodge and Bozeman.  Following the election, there was no clear victor, but the field was narrowed to Anaconda and Helena.

To fully understand the election at hand, it is helpful to see a map of Montana at the end of the 19th Century. This map was published in 1890, at a time when the population of Montana was estimated to be 130,000 people. 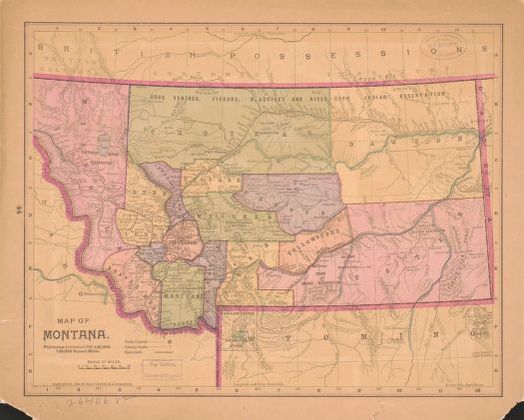 Stepping back in time, it may also help to understand a brief timeline of Montana history.

Many remember the Election of 1894 as a duel between William A. Clark (in support of Helena) and Marcus Daly (in support of Anaconda). Both of these men were among Butte’s Copper Kings. Leading up to the election, both Clark and Daly spent significant money promoting their choice for the capital. Records suggest (“Montana: Stories of the Land”) that each vote in the election cost nearly $56 – a sum that was unheard of at the time. Leading up to the election, a variety of pamphlets were published by both the Helena Capital Committee and the Anaconda Capital Committee promoting the applauded aspects of their given towns.

One pamphlet, titled “Anaconda, Montana 1894” suggested that Anaconda was the best choice for the permanent capital of Montana because “Anaconda is the home of plain people – people as have built up Great Falls, and Butte, and Missoula, and Dillon, and Bozeman, and Livingston and other prosperous cities of the state” – clearly leaving Helena unnamed. Further, they suggested that Helena had a reputation as “a city of snobs.”

Meanwhile, Helena argued “Helena is everybody’s town — Anaconda is one man’s town” referring to the fact that Daly owned most of Anaconda and its industry. The Helena Capital Committee published a satirical document titled “Helena’s Social Supremacy” commenting at one point that even the town’s robbers showed proper etiquette.

These documents are only one example of the propaganda being shared at the time to levy the vote in favor of one community or the other. Clark spent nearly $500,000 while Daly spent $2.5 million buying newspapers, starting clubs, sponsoring parades, passing out booze and lighting firework displays.

As the election results came in, Helena took an early lead being favored by the eastern counties. The surprise was that Helena had captured nearly 40% of the Butte vote and thus took the election. But to say it was a close race would be an understatement. According to “Montana: Stories of the Land” a “difference of 1,910 votes and a margin of 1.8 percent made Helena the state capital instead of Anaconda.”

The celebration that ensued in Helena’s streets is one that has not been seen since, some reporting that nearly 5,000 came to Helena to participate. It is said that Clark picked up a bar tab for $30,000 on November 12, the official night of celebration.

The election of 1894 placed Helena as the permanent capital of Montana, securing its position of prominence and likely solidifying its fate as one of Montana’s most vibrant towns.