With news of a massive gold rush in Bannack, Montana, Plummer left Electa Bryan at the Sun River Farm. Having high expectations of finding similar success to that of his time in Nevada County, he arrived in Bannack by November of 1862 with Jack Cleveland. He promised Electa that he would return in the Spring to finalize their marriage once he was settled and established in their new home. The discovery of gold had drawn thousands out West in hopes of striking it rich, but gold is money and money is motive.

As the population continued to grow, the lawlessness in the region increased. Murder, disputes, and robbery were daily occurrences in Bannack, a town with no formal justice system. Jack Cleveland had become somewhat of a nemesis to Plummer since their departure from the farm. You see, like Plummer, Cleveland is said to have had a romantic interest in Ms. Bryan, but his advances had not been returned.

One day, Plummer was in one of his frequented watering 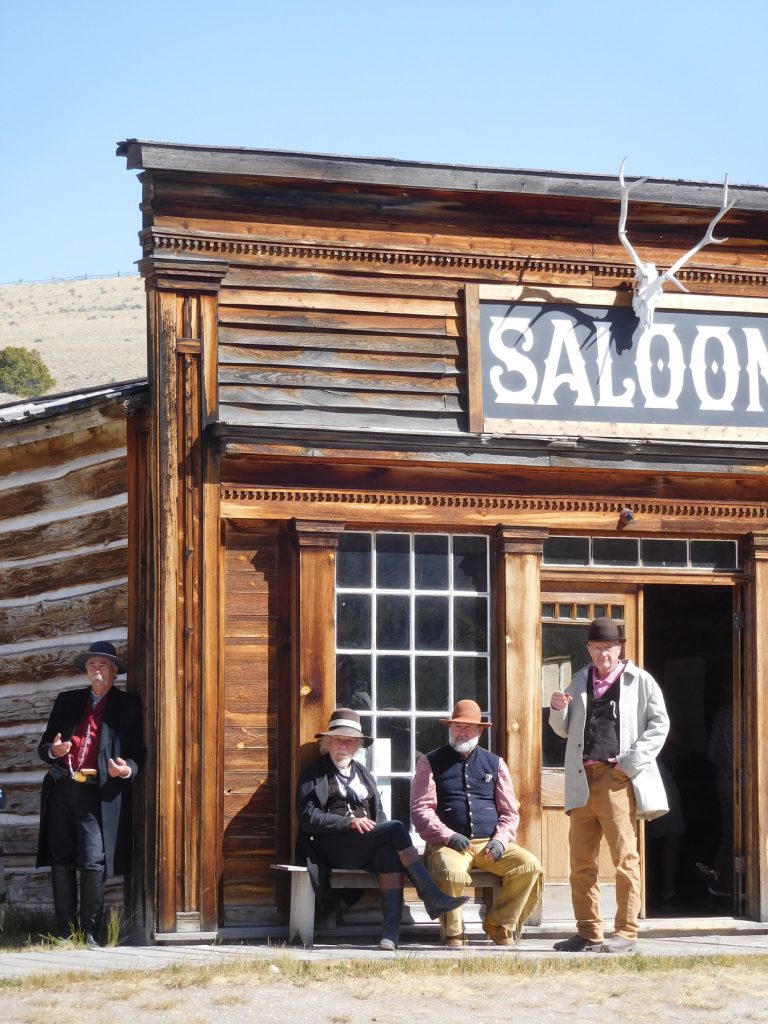 holes, the Goodrich Saloon,when Cleveland stumbled in and began making remarks that he expected his debts to be paid, was afraid of no one,and would listen to no one. Witnesses claimed that Plummer did not provide an initial reaction to the taunting, but his limits had been tested. Plummer jumped up firing a warning shot into the ceiling of the saloon, and when Cleveland showed no signs of holding his tongue Plummer fired a second shot this time hitting Cleveland, firing two more, he was mortally wounded. Most men in the saloon ignored the altercation going about their own business.

Finally, the local butcher, Hank Crawford – later to become the Sheriff, took the wounded man to his home, unable to do anything but make him comfortable in his dying moments. Crawford returned to collect additional blankets and was confronted by Plummer who questioned what Cleveland had told Crawford about his past. Crawford reported that Cleveland was unwilling to say anything about the bad blood between himself and Plummer. Plummer responded by stating that if Cleveland had said anything against him he intended to “kill him in his bed.” Some suggest that Cleveland had indeed divulged information about his relationship with Plummer, implicating him in the violent past that he had nearly erased with his move to Bannack, but Crawford was so scared of Plummer that he wouldn’t admit to this knowledge. Cleveland was rather unpopular in town, and for whatever reason Plummer was not immediately tried for his murder.

Eventually, Crawford was able to convince the miners’ court to bring charges of murder against Plummer. Having to convene a court following a violent disagreement between members of the Bannock tribe and some miners, Crawford seized the opportunity. Plummer appeared on the condition that he would be given a fair trial – he was quickly found innocent. Dimsdale and Langford (the leading sources of the time) suggest that Plummer was acquitted because of witness testimony of Cleveland’s threats. The other men on trial were convicted and banished. This was Crawford’s first case as Sheriff and it is noted that he did not enjoy his position and wanted to resign.

Following their first winter in Bannack, Plummer was among the men staking claims in hopes of making a better life for himself and his soon-to-be wife. Plummer took claims on the Dakota lode, working with a local blacksmith to create a crude water-powered stamp mill that successfully crushed out a significant amount of gold. Some believe that Plummer tried to make friends with Crawford around this time, but Crawford refused. Some of the townspeople reported seeing Plummer lingering outside the butcher shop and warned Crawford that Plummer was out to get him. Instilled with fear, Crawford waited for an opportunity to catch Plummer off guard, knowing that he would not stand a chance in a proper duel. Shortly thereafter he saw Plummer across the street and took his shot, hitting Plummer in the right elbow. The shot knocked Plummer to the ground. As he stood up, Crawford shot again, this time missing his target. Plummer continued walking to his cabin holding his gun in his left hand. Fearing the error in his ways, Crawford hid in a neighboring cabin until dark at which time he fled never to be heard from again. The doctor advised Plummer to amputate his arm to save his life, but Henry refused saying he would rather die than lose his arm.

Despite his feud with Cleveland, Plummer had established a positive reputation in town. Knowing they needed someone to protect the citizens and enforce the “law,” an election was held to replace Crawford. On May 24, 1863 Plummer was elected Sheriff of Bannack and the surrounding area. Plummer enlisted Smith Ball, Buzz Caven, JW Dillingham, Buck Stinson, and Ned Ray as his deputies.

**Stay Tuned. Part 3 and 4 continuing Henry’s time in Southwest MT and Part 5 on the discrepancies in his story.

Much of the research done for this series came from: Mather, R. E., & Boswell, F. E. (1998). Hanging the sheriff: A biography of Henry Plummer. Missoula, MT: Historic Montana Pub. Purchase their book on Amazon.