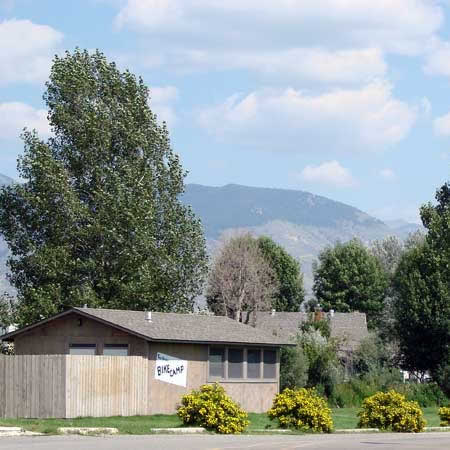 Over the past seven years, the Twin Bridges bike camp has provided a welcome oasis to road bikers who are more used to paying exorbitant prices at RV campgrounds or furtively pitching their tents in parks and washing in public restrooms. The brain child of Twin Bridges local Bill White (the camp is now named in his honor), the camp sits in Jessen Park, on the edge of town near the Beaverhead River. In addition to level ground for tents, the camp provides an indoor seating area to eat, a kitchen area, an outdoor picnic area, bike-repair stands, a toilet, and a shower. In addition, the town of twin Bridges has a host of other amenities for the weary traveler: a laundromat, a few restaurants, free wifi in the library, and a grocery store that, in addition to all manner of fresh food, stocks common bicycle parks. Many bikers choose to take a few days off of their trip and spend the time exploring the Twin Bridges area, perhaps renting a canoe to float down the river or spending a day exploring nearby Virginia City.

Twin Bridges sits at the cross roads of two of Adventure Cycling’s most popular bike trails. The Trans America Trail, the first trail mapped by the group, passes through Oregon and Idaho before entering Montana at Lolo Pass, near Missoula. From there it jogs south, passing Twin Bridges on its way to West Yellowstone, through parts of Wyoming and Colorado and then east to the Eastern Seaboard. Another Adventure Cycling trail-the Lewis and Clark Trail-passes through Twin Bridges as it follows the route of the Lewis and Clark Expedition from St. Louis to the Pacific. In 2009-its first year-the Twin Bridges Bike Camp hosted over 300 bikers. Since then its popularity has only grown. I would imagine that Montana can be a daunting state to bike-what with its long, lonely stretches of highway, its rugged terrain, and its generally narrow roads-which makes the hospitality of Twin Bridges and its Bike Camp even more welcome.