When the subject of Southwest Montana hauntings comes up, the Dumas Hotel is almost certain to follow. Little wonder, too. The notoriously spooky building was once in the heart of Butte’s red-light district, “a one-block area where most of the vices of nineteenth century were available for a price.” A place stalked by the kind of violence and danger that give rise to the most chilling of ghost stories. The Dumas accumulated a good many tales of hauntings and was recently featured on Episode 3 of Travel Channel’s The Ghost Town Terror. Today, brave visitors can even embark on their own exploration of the building. Behind all spine-tingling experiences lies the story of Butte, the Richest Hill on Earth, where violence and vice were never far away. 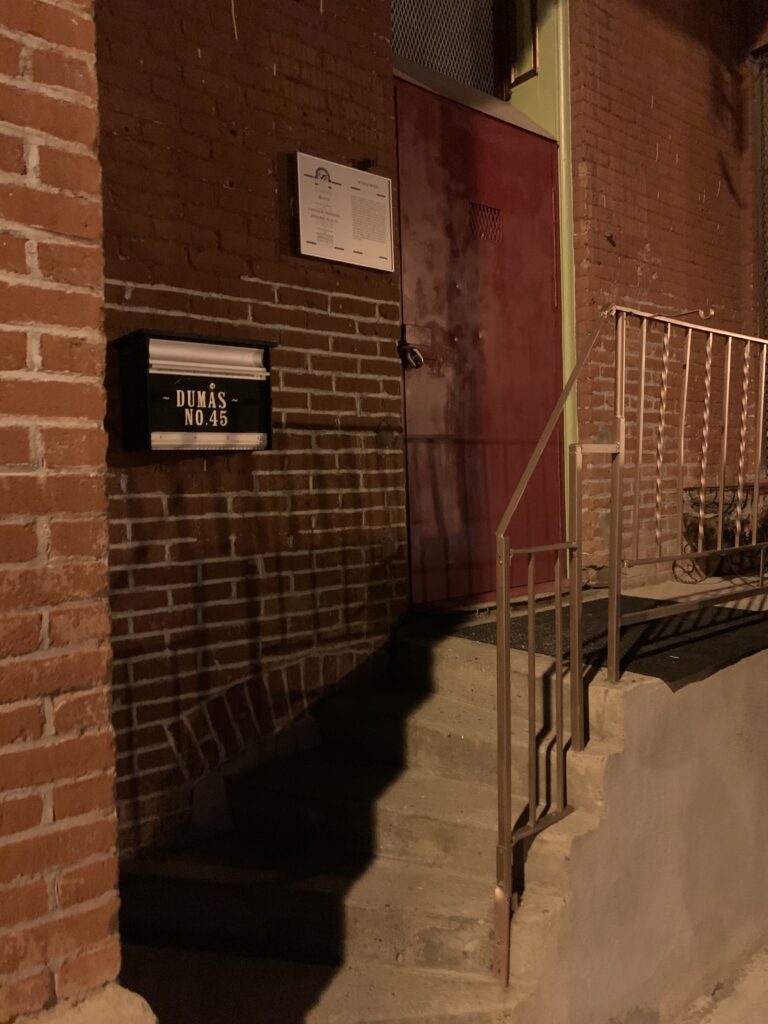 In its heyday, the red-light district of Butte was said to rival the larger districts of San Francisco and New Orleans. The Dumas itself, purpose-built in 1890, is the longest running brothel in the United States, only shutting its doors in 1982 — 65 years after Montana outlawed prostitution.

By the time the brothel was shuttered and Ruby Garrett, the last madam, was imprisoned for tax fraud, the Dumas was an oddity, but during the late 1800s and early 1900s, the hotel was just one of many such establishments along Mercury Street in Uptown Butte. Unsurprisingly, given the city’s reputation, Butte’s red-light district was just two blocks south of the respectable business of Park Street. Most of the district was characterized by the single-room “cribs” that can still be seen in the basement of the Dumas — small, cramped quarters that served as both home and business for the prostitutes of the city.

These uncomfortable cellar room and the stories of violence, fights, brawls, drugs, and alcohol that pepper the archives of Butte’s newspapers paint the kind of picture that one would expect of a gritty city filled with rough-and-ready miners. But as the ‘Richest Hill on Earth,’ Butte also attracted its fair share of millionaire elite. The elegant parlors on the second floor of the Dumas point to the lavish lusts of the upper crust. Brothels like the Windsor and the Irish World doubled as uber-posh social clubs and catered to the elite’s need to keep up the façade of respectability. So did the Theatre Comique—the burlesque/vaudeville nightclub just off Park Street that existed in the gray area between vice and respectability. Famous for its risqué performances, the theatre’s upper boxes were shielded by mesh screens and accessed through the alley — allowing the rich and respectable to watch the shows unobserved.

Butte’s wealthy also made money from renting out properties in the red-light district. The Dumas was built as a brothel in 1890 by the real-estate speculators Arthur and Joseph Nadeau. Nadeau Investment company eventually owned at least five “female boarding houses” in the district. Helena millionaire and upstanding citizen Anton Holter owned the Blue Range cribs in Butte as well as other cribs on nearby Galena Street. The Blue Range was later bought by Butte Mayor, Senator, and newspaperman Lee Mantle.

All this to say that owning brothel properties was an acceptable business in turn of the century Butte. Moral reforms drove prostitution off the main streets and into the cribs of the maze-like back alleys. The Dumas’ basement cribs, once connected to other buildings through a network of tunnels, dated from this period. Despite this pushing of prostitution underground and behind an increasing veneer of reputability, the businesses continued unabated. Public opinion only really turned against prostitution when Montana formally outlawed the practice in 1917—in response to the widespread venereal disease of World War I troops. This didn’t necessarily change much, though, as there was a similar crackdown in 1943 during World War II.

Still, some brothels (and no doubt many prostitutes) weathered these storms. Sometime during this period, the Dumas was re-branded as a hotel, though the business model hadn’t changed, and the Nadeaus sold the building. Elinor Knott ran the Dumas from 1950 to 1955, when she was found dead in her room. The last person to own the Dumas and run it as a brothel was Ruby Garrett, exactly the kind of colorful character you would expect. In 1959 Ruby shot her abusive husband in a Butte bar called the Board of Trade, for which she served 9 months in prison. She bought the Dumas in 1972 and would probably have run it much longer except that in 1981 she was robbed and pistol-whipped. The subsequent trial of the robbers brought Ruby to the unwanted attention of the IRS, who eventually jailed her for tax fraud, after which the Dumas was shut down.

The Lives of those who Worked in the District

Perhaps the hardest part of writing the 92-year history of a brothel in less than a thousand words is to capture the lives of the women who lived and worked in the district. From the mysterious death of Elinor Knott to the accounts of suicide, violent assault, and death through botched abortion that litter the records, it is clear that it was a violent and unhappy place. The kind of place that might well produce the paranormal. But each of the countless “public women” in Butte were individuals with lives and stories that make them distinct and unique. It is often only through the public record—like police reports and newspapers—that we can hear the lives of these women. And we must read such records carefully to listen to the women as they speak through the sensational and scandalous details in which the newspapers delighted.

For more on the lives of Butte’s prostitutes, perhaps the best place to start is this article from Montana Women’s History titled Red Light Women of Wide-Open Butte.

You can also look for a copy of historian Mary Murphy’s Mining Cultures: Men, Women, and Leisure in Butte, 1914-41. Murphy also has a really good, though hard-to-find article “The Private Lives of Public Women: Prostitution in Butte, Montana, 1878-1917” (there’s a hard copy in the Butte Archives)