The Haunting of Quartz Street Station 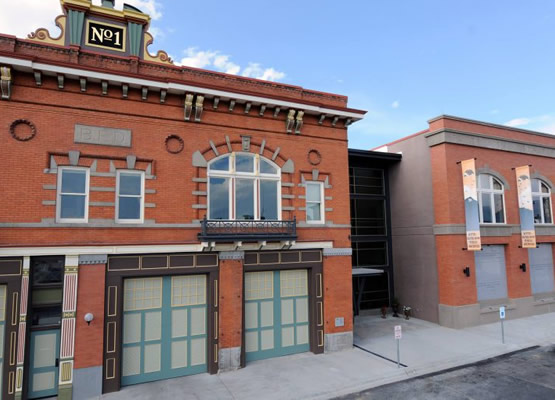 The Butte Silver-Bow Public Archives sit at 17 W. Quartz Street in a building that once served as “Fire Station Number One.” This building remained the Quartz Street Fire Station until 1976 when the Montana and Mercury Streets Station was opened.

As you may know, the mining town of Butte, America saw its fair share of tragedy over the years. The Granite Mountain/Speculator Mine Disaster of 1917 (the largest hard rock mining disaster in the world) being one example. If we roll the clock back several decades, we find another tragedy that would claim the lives of many and affect the entire community.

On January 15, 1895, firemen responded to a call of a fire in the South Butte warehouse of the Royal Milling Company. What these men didn’t know was that tons of blasting powder was being illegally stored in the neighboring Kenyon-Connell Commercial Company and Butte Hardware Company warehouses. It was here that tragedy struck. As the first flames reached these warehouses, the metal roof was blown 100-feet in the air and the lives of 35 people were taken. With debris being turned into missiles, residents within a mile radius of the blast were killed. Authorities reported at least 57 deaths (though the toll was likely much higher) and over 100 injured. Among the dead, 13 of Butte’s firefighters. Three survived only because they were held up en route to the warehouse fire.

Many who visit the Archives today report muffled voices, flickering lights, and the ringing of long disconnected alarms … maybe the firemen who lost their lives in the line of duty have taken up residence at 17 W. Quartz, a station built five years after their deaths. 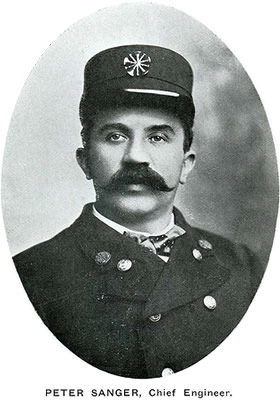 Sanger was no stranger to tragedy. In 1904 his wife, Margaret, succumbed to cancer, leaving behind a son and daughter. Only two years later while attending school in Dillon, their daughter, Hazel, took ill and passed of peritonitis before her father and brother could reach her side.

In 1908, Sanger remarried and Louisa, his new wife, moved into the apartments above the Station. With a clear view of the engines leaving and returning to the station, it is likely that Louisa would keep a watchful eye from above.

In 1915, the chief and his crew were responding to a call on “Chemical Auto No. 5” (modern fire engines were purchased in 1912) driving nearly 40 miles per hour when the engine collided with a Walkerville Street Car. The collision threw crew members nearly 30-feet, yet Sanger was the only one to sustain serious injuries. He was diagnosed with a brain concussion and hemorrhage. Although he remained conscious, his condition did not improve. Some weeks later he and Louisa took a train to San Jose, California, to undergo a surgery which he did not survive.

Louisa brought her husband home to Butte to be laid to rest in the family plot at St. Patrick’s Cemetery. Soon after, Louisa moved back to the Los Angeles area to be with family.

Haunting of the Quartz Street Station

Now home to the Archives, the building has largely been left untouched with the four large bay doors, the windows to the private residences, and even the empty row of lockers that once belonged to the firemen of Butte.

While in the parking lot, the director of the Butte Silver-Bow Public Archives looked up to the east window and caught a glimpse of an older woman drying her hands on a dishtowel and keeping watch over the station below. She considered that her imagination may have run wild. That is until she came across a picture of the very same woman: Louisa Sanger, keeping watch for the men to make a safe return.