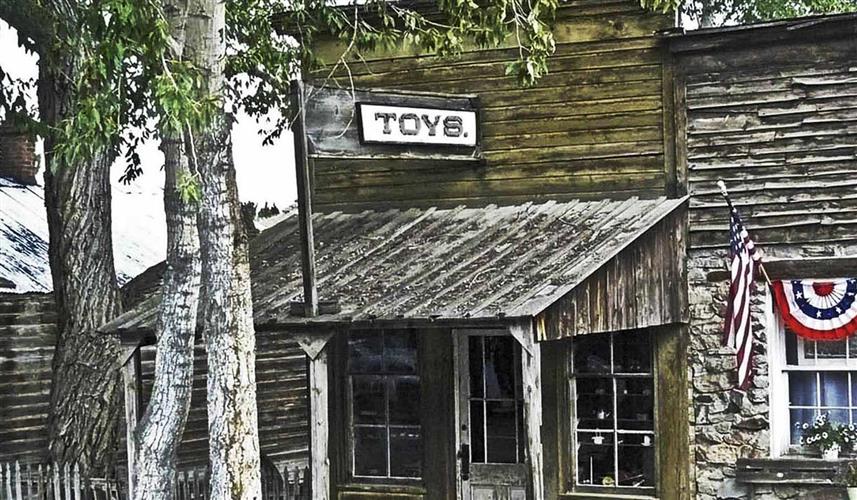 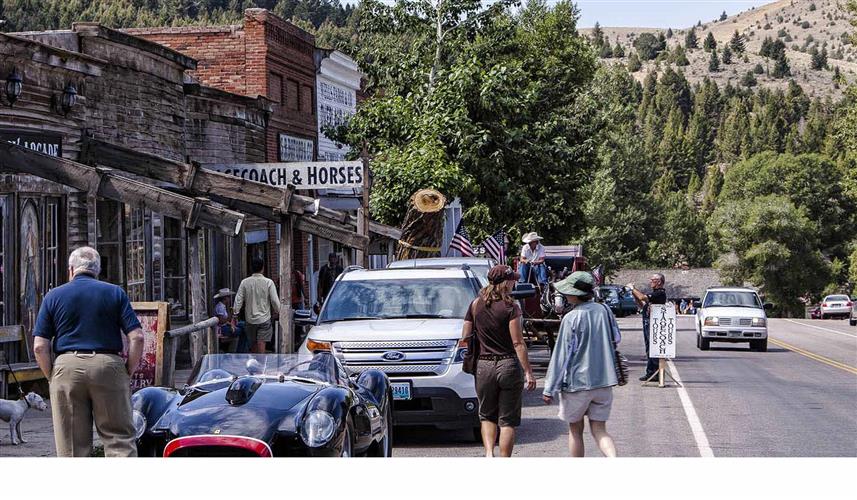 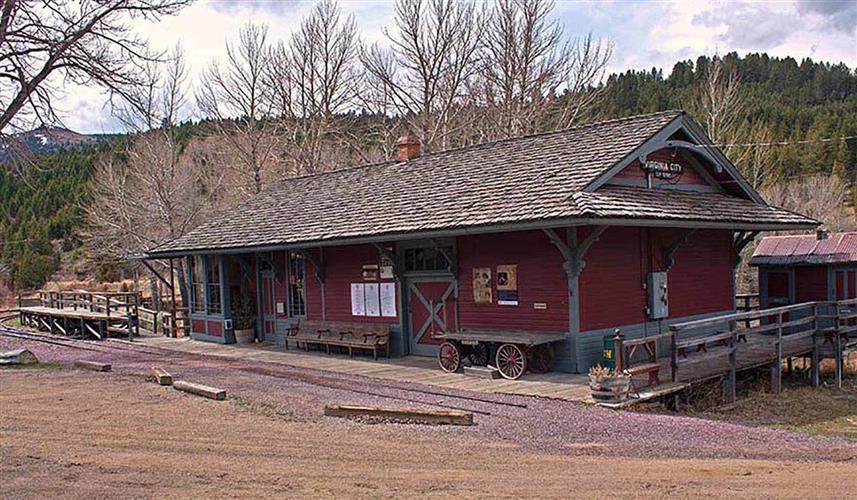 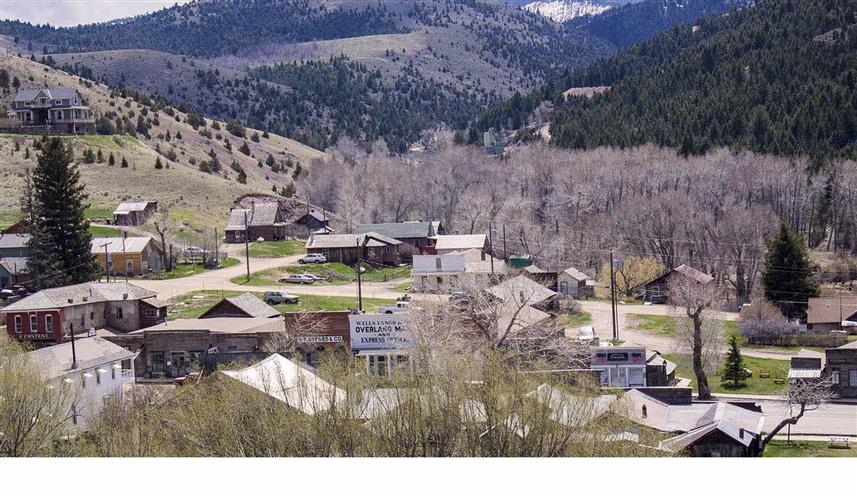 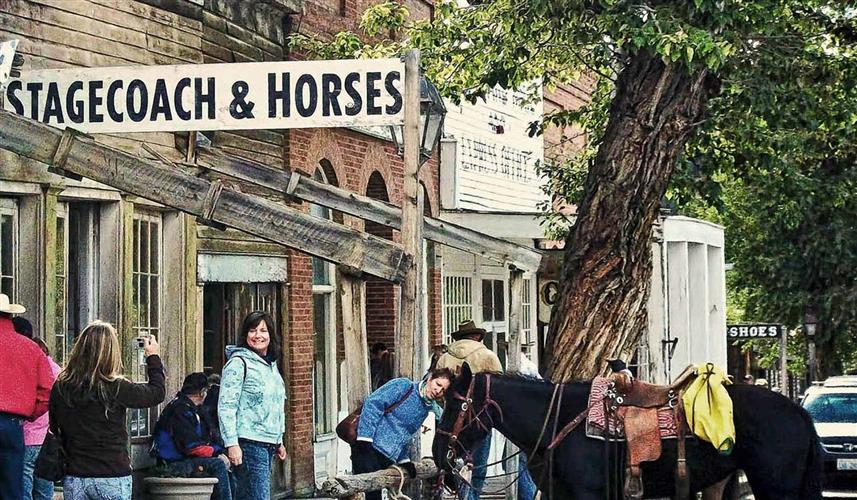 Virginia City, Montana - step back in time and relive the Montana frontier gold rush experience of the mid-to-late 1800s. Today, through various serendipitous twists of fate, the Virginia City of old survives in a uniquely engaging relationship with the present. A small, friendly community nestled amongst the renowned gold-laden hills and gulches of Alder Gulch. Virginia City remains a true historical treasure. Recognized in 1961 as a National Historic Landmark, the town has seen every form of boom-and-bust cycle imaginable. Frantically founded in 1863 in the midst of yet another western gold rush, the town and surrounding areas quickly became home to several thousand feverish fortune hunters. Virginia City because of its convenient location in the midst of the gold fields rapidly grew to become the territorial capital and 'Social City' of the Montana frontier.

This combination of abundant economic wealth, growing political power, and limited civilizing restraints created ripe conditions for excessive behaviors amongst the early residents of this 'wide-open town'. In this lonely, isolated and lawless town the demand for brothels, saloon, dance halls, and gambling parlors greatly exceeded the call for churches, schools, and civilized concepts of justice. Until finally in a desperate attempt to stem this tide of unrestrained lawlessness, 'upstanding' members of the community united in response to a particularly brutal string of robberies and murders to form the Vigilantes. According to historical accounts the Vigilantes were responsible for administering a particularly effective form of frontier justice, wherein twenty-four men suspected of being road agents (outlaws) were hunted down and executed over a brief four-month period. No one was beyond suspicion, as evidenced by the fact that one of the early recipients of the Vigilante's juggernaut of justice was Henry Plummer, the local sheriff. He was hung along with his deputies from his own gallows in the nearby community of Bannack for his reported involvement as the ringleader of the gang of road agents. Five other 'convicted' road agents were captured and hung in Virginia City. Their remains are interred in the Boot Hill Cemetery above Virginia City. After this intense period of social unrest the Vigilantes disbanded as quickly as they formed, melting back into the day-to-day fabric of this now more civilized community.

During this early period the community experienced impressive growth and cultural refinement, as the crudely constructed log cabins of the early prospectors gave way to the more deliberately and tastefully designed houses and stores of businessmen and established miners. However, as is often the case with gold rush communities, within a few years of it's founding, the 'easy' gold played out and most of the initially large population moved on to the latest new strike. By the early - 1870s, Virginia City's status as the territorial capital was being seriously contested, until finally in 1875 the political might of the rival community of Helena and the developing gold fields of Last Chance Gulch, succeeded in finally 'stealing' away the claim to the capital. The town continued stubbornly onward, retaining its position as the county seat for Madison County, but its spirit had been broken and by the late 19th-century was but a shadow of its former glory.

So began Virginia City's slow painful slide into obscurity. If not for the advent of new mining technology known as dredge boats - large floating mining factories that revolutionized the placer gold mining industry around 1900 and allowed further exploitation of Alder Gulch's riches, the town's colorful history would have come to a abrupt close. These large-scaled industrialized mining activities enabled deeply buried gold deposits to be profitably developed and kept the community alive until the 1940s - marking an amazing long 80-year period of active gold mining in this area. However, the advent of WW-II effectively spelled the end to Virginia City's long run as a major mining center.

The mid-1940s found Virginia City in a depressed economic and social state, the mines were closed by federal mandate as nonessential to the war effort, and the local population of able-bodied workers, both men and women, were either drafted or relocated to work in war-related industries. Virginia City was almost a ghost town. Its population was reduced to less than 100 persons, comprised mostly of elder residents waiting out the war. Then once again fate stepped in to breath new life and purpose into the old buildings of the town. Charlie and Sue Bovey, avid history buffs and antique collectors, visited Virginia City in the early 1940s and saw in the old, mostly abandoned buildings, not worthless junk, but a priceless collection of Western American history dating back almost 100 years to the very beginning of Montana's development.

Since the 1940s, thanks to the preservation efforts of the Bovey family, Virginia City has experienced yet another period of steadily growing prosperity as a major heritage tourism destination. Located only 85-miles northwest of Yellowstone National Park the town enjoys a stable population of 150 year round residents. That number effectively doubles during the active summertime period (May-September) when thousands of curious daily visitors explore the boardwalks and back streets of the town. In spite of almost 50 years of active tourism, the town still retains a compelling sense of authenticity that thrills even the most demanding modern visitor. The historic buildings and landscape of the town act as a colorful backdrop for the many engaging activities available to the inquisitive visitor. A few such examples include two professional theaters, several tour groups, steam train rides, and live demonstrations of heritage trades, i.e. blacksmith's, gold-panning, etc. Today, most of the properties and artefact's once owned and interpreted by the Bovey family have been purchased by the State of Montana to ensure their long-term care and protection. The essence of the Virginia City experience is a casual, inviting setting that lends itself to a relaxing family outing or fun-filled weekend retreat from the typical hustle and bustle of modern life.