It should come as no surprise that Virginia City has its fair share of haunting tales. The gold rush town was the epicenter of the brutal vigilante justice that saw 20 men hung for robbery in 1863-1864. And, with thousands of rough and tumble miners seeking their fortunes in the streams around Virginia City, you can bet that more than a few met untimely and rather violent deaths, just the sort of thing that makes for good ghost-story-telling. 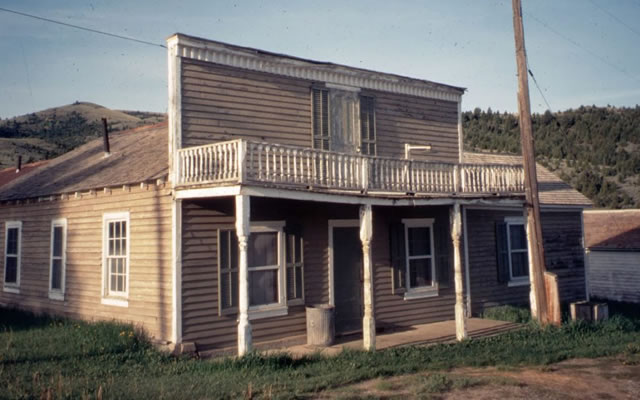 A former hospital, now the Bonanza Inn, is the site of several hair-raising tales of things that go bump in the night. There is, however, one ghostly figure who doesn't quite fit the mold, which Montana historian and ghost-story-teller par excellence Ellen Baumler recounts on her blog, and in her book Spirit Tailings: Ghost Tales from Virginia City, Butte, and Helena (2002).

According to Baumler, "Several generations of people, unknown to each other, tell of the spectral 'black robe'" who drifts through the streets of the town, occasionally keeping vigil over the beds of the sick. It should come as little surprise that such a figure should haunt the area around the Bonanza Inn. In its earlier life, the Bonanza was the hospital for the Sisters of Charity who served in Virginia City in the 1870s.

One nun, Sister Irene, was particularly beloved by the townspeople. Of the few nuns, she seems to have been the one who most frequently traveled the streets, making house calls on the sick and needy, and leading the catechism class for the mining town's no-doubt-unruly youngsters.

If there is a spectral nun wandering the streets of present-day VC, Baumler suggests, it is likely Sister Irene, who went on to serve the Sisters of Charity in Denver and Kansas before returning to Montana to serve as the superior at St. Vincent's Hospital in Billings and St. James' in Butte. She died in 1944 at the age of 87, a beloved feature of Montana's early state history.

On her blog, Baumler details her own encounter at the Bonanza:

"I stayed in Room 7 in the summer of 2000. Coming out of the steamy bathroom after a shower, a strong unpleasant odor hit me, like that of the geriatric ward where I worked as a candy striper in high school. The cloying smell lingered then dissipated. Another guest in Room 7 awakened to the sound of water splashing, as in a bowl. Later she discovered that the sisters used basins for washing wounds and bathing patients.

One hot and still August afternoon I lay down to rest in Room 2, thinking about my lecture that evening. I had the Bonanza Inn all to myself. At first they were so soft I didn’t notice. Then I could hear the small female footsteps in sturdy shoes at the far end of the hallway. She came closer, pausing midway down the hall. I clearly heard a key turn in a lock. The door clicked open and softly closed. I heard a few bumps and clunks, and then more footsteps behind the closed door. Slowly they grew faint and then faded away. I felt honored that Sister Irene visited me."